Get closely acquainted with the application domain

Every database table is meant to represent some sort of entity. So, a good start to designing a database schema is to become familiar with the application domain. This is even more crucial if the project exists in a state of rapidly changing requirements and an unclear scope.

As customers use applications to solve their business problems, all their feature requests will be based on processes specific to their particular industries. So, even if they do not request something yet, it is a good move to keep in mind how they do business and depict it in a database schema.

Let us consider an example. Our customer is a logistics company looking for a new application to track transportations. Their initial requirements are ways to track:

These kinds of transportation may look entirely different and have different properties and varying logic around them, so it is easy to get disoriented and implement them as different entities unrelated in any way. However, it is possible that tracking all these transportations is needed to generate a single large report about the state of warehouses. This may come as a surprise to those unfamiliar with the application domain and can be costly if the database schema is not properly designed.

However, if the business analyst or developer has the experience of developing such systems before or gets closely acquainted with the business domain, there is a better chance of satisfying the customer.

Think about defining a “basic” entity

For some domains, it may be useful to distinguish a “basic” entity. For example, any logistical document in the system may be described as transportation of some commodity going from place A to place B with the dates of departure and arrival. Of course, other fields may differ dramatically for naval and railway transportation. However, if your application needs a global logistic report that involves all kinds of shipments, such an approach will prove to be very useful.

Another example of using a “basic” entity may be seen in the financial domain. There can be several different types of financial documents, but all of them have a sender, a receiver, a date, and finance accounts of revenue and expenditure. So, when designing reports including all finance entities, it is useful to have a single database table with all the necessary data.

The following ER diagram shows the possible architecture of a system based around financial entities, where they have common fields. With such a database schema it is convenient to build reports that include multiple different business objects. Invoices and payments are both inherited from the parent entity, which stores the most essential fields. 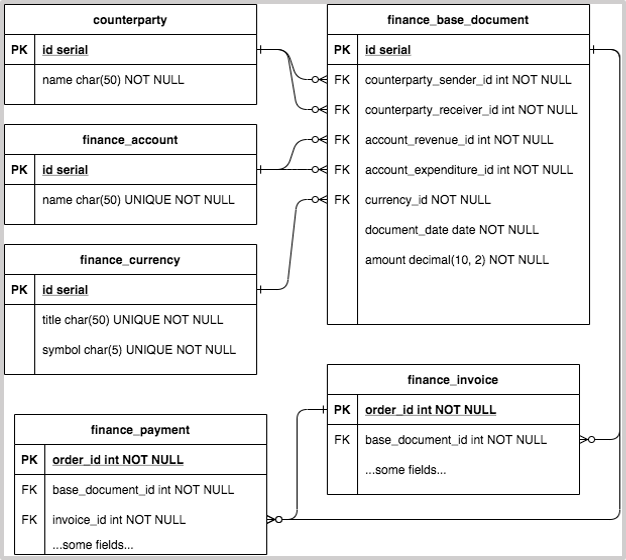 The most straightforward way to implement a database schema using such “basic” entities is describing a table for all basic fields, and then describing tables for each entity, all of them having foreign keys to the basic table. PostgreSQL also has its own table inheritance mechanism, but with some caveats, so be careful.

Be careful with “symmetric” object properties

It may be tempting to name your contract “sale/purchase” and your payment “incoming/outgoing,” as well as to have a single “other party” field, but be careful about it and think where the application might grow. Sometimes a system designed to be used by a single company may require the inclusion of contracts between two departments with proper display in reports.

Having statuses such as “incoming” and “outgoing” is perfectly fine if you are sure about the application’s scope and there are little chances of growth and requirement change. However, in some cases, it is reasonable to store information about both parties of the contract/invoice/logistics and simply deduce the “incoming/outgoing” type depending on the point of view.

scope and there are little chances of growth and requirements change. However, in some cases, it is reasonable to store information about both parties of contract/invoice/logistics and simply deduce the “incoming/outgoing” type depending on the point of view.

It may be an obvious tip, but sometimes it gets ignored and backfires. Numeric values such as money or amount in tons must be stored in data types that ensure exactness.

Moreover, in such data types it is usually possible to set a specific amount of digits after the decimal point. This may help enforce some constraints to data format. The examples of using this approach may be:

the decimal point. This may help to enforce some constraints to data format. The examples of using this approach may be:

Using PostgreSQL as an example, here is more information about the subject.

Use SQL views as a way to reuse business logic

SQL view is a powerful tool for describing and reusing business logic. Basically, it is a query stored under a certain name, and the query is executed when the view's name is referenced. We are not currently looking at materialized views; these are an even more powerful tool for a narrower set of use cases.

There are several reasons to use views.

Imagine having an application that is focused on working with data that expires once in a while, such as “trending” blog posts or “active” tasks in an issue tracker. Selecting such data requires filtering, which can be described inside the view. With this approach, the developer is able to work with trending blog posts without concern for how the filtering is implemented. And later the filtering logic may be changed without the need to rewrite all the queries where the view is used.

Another use case is the need to have some calculated value; for example, to subtract VAT from the value of a contract without storing it. Such calculation may be sophisticated, and its implementation can change over time, so having it described in a single place is a good choice.

It is important to note that in some cases, complex calculations are best described in views, not in stored procedures. This way the query interpreter will have better control over the data you need, and the data will be selected more efficiently.

Since regular SQL views are simply “stored” queries, they make use of your database indexes. Moreover, you can add some logic in a query that calls for the view, and for the query interpreter, it will be as simple as an ordinary SELECT query.

Now let us consider an example. We have a blog_post table that looks like this:

...and has the following data:

There are many places in the application that need a short representation of the post's body only of the latest posts. This logic can be implemented like this:

This view selects all the fields of the blog_post table, as well as the new field, body_preview. Note that fields under * will always return all current model fields. When selecting from the view, only the posts created/updated in the last week are returned. The view can be named like this:

And the output will be:

Since the view is simply a reference to a query, views can be called inside another view. Creating such a “hierarchy” of views is a great way to compose business logic, but one must be careful. With this approach, it is essential to keep views as simple as possible, since a certain view may become a bottleneck for all the views that make use of it. For example:

Every table in this diagram has a corresponding view with additional logic. However, there is a need to extend a_view with some additional, heavier joins/function calls. If it is not needed in b_view, it is better to describe another view for table_a containing all the additional logic. This will help to reuse logic from a_view without impacting b_view and c_view.

There is a lot more to SQL views that can be found out here.

Designing and extending a database schema is not an easy task, but keeping these tips in mind makes working with databases painless.

In my recent project there was a lot of data business logic, so I had to organize this code somehow. In this article I'll describe a few hints on how to it.

Vladimir Sidorenko
Jun 14, 2017Technology
How to Deploy a Django Application on Heroku?

In this article I'll show you how to deploy Django with Celery and Postgres to Heroku.

Quite often we have to write paginated or filtered blocks of information on page. I created a decorator that would automate this process.